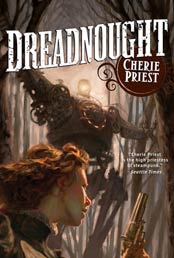 So I have a friend who works for a large online retailer and she help me get the ARCs they send them for preview. I was pretty stoked to get Dreadnought especially since I recently read Clementine. I wasn't super impressed with Clementine. I really liked Boneshaker and was looking forward to reading about some of the same characters. Sadly, I wasn't crazy about the characters in Clementine. And this series exists in the same world with some of the same characters rather than one continuous story.
Ok, so Dreadnought is the story of Mercy Lynch, a nurse who is traveling from Virginia to Seattle. This book is set during the Civil War (which isn't as obvious in Boneshaker). There's lots of discussion about loyalties to the North, the South, or Texas. The war was really present in Dreadnought. Mercy works in a war hospital. She travels with soldiers.
I really like Mercy. Life's been hard for her. Her father left her and her mom when she was young. She's a nurse in one of the best war hospitals in the Confederacy. It's the best since they get the worse cases and work miracles on those who are close to death. When Mercy's father sends word that he's ill, she heads out to Seattle by airship and train. Let me tell you. It's an interesting trip.
I agree with The Mad Hatter about this book being the book version of Wild Wild West. I think that's why I liked it so much. There's a lot of action and a good story line. Makes me excited for the next 2 (Ganymede and Inexplicable) coming out in 2011 and 2012. Highly recommended.
Other reviews can be found at The Mad Hatter Bookshelf & Book Review, Dreams and Speculation, and Reading The Paranormal.
Posted by Linda at 3:31 AM