Paris, He Said by Christine Sneed 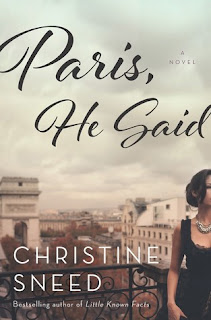 I picked Paris, He Said off the library shelf because I usually like a good book about Paris. And Paris, He Said was no different. It was a well paced story about an American woman moving to Paris for her much older boyfriend. This is not chick lit but more contemplative and introspective.

Jayne has been struggling in New York when she meets Laurent. Jayne would like to have more time to paint and sketch but she has to work 2 jobs just to afford her rent. When Laurent offers to take her to Paris and allow her time to devote to art, Jayne takes the chance. The story is mostly told by Jayne but Laurent has a few chapters.

While reading Paris, He Said, I kept thinking it was like reading something you wanted to savor. The story was so well paced, not rushed at all. But there's not a lot of resolution at the end. Sneed examines Jayne and Laurent's relationship as well as those around them and their own relationships with others. She raises more questions and lets the reader make their own decisions. If you like stories that wrap up neatly, Paris, He Said isn't the book for you.

Overall I enjoyed Paris, He Said, but the lack of a solid ending left me a little sad. I would have liked the end to give me a better idea of what happened to Jayne. But I liked Sneed's writing and would pick up another of her books. I was tempted several time to book a trip to Paris. Sneed makes you feel like you are there. Others who shared their thoughts on Paris, He Said: The Bookish and The Romantic and Largehearted Boy.
Posted by Linda at 3:46 AM