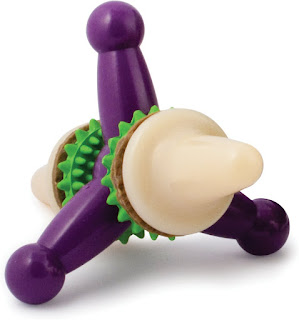 Busy Buddy
There are several different types of this toy but this is the one that Houdini loves most. He can chew on this for hours. My friend's dogs eat the treats off within minutes. He's impressed that Houdini leaves the treats alone for the most part and just enjoys chewing on the plastic parts.

Longidudes Racoon
Houdini loves toys with the crinkle. This one becomes a tug toy. He loves tugging on this one. One lasts several months. They are well constructed. In the past year, we've gone through 2 of them. 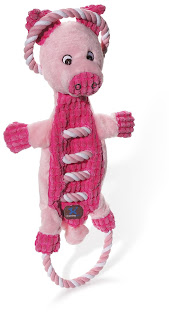 Ropes A Go Go Pig
This one is a better tug toy. Houdini will loop one end on his leg and play tug on his own. This one seems to be constructed a little less well. One lasts a couple of weeks. 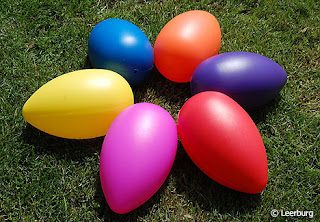 Jolly Egg
Houdini's not a fan of balls. Fetch isn't something he enjoys all the time. But he does enjoy chasing this ball. It frustrates him in a playful way. Gives him great exercise. 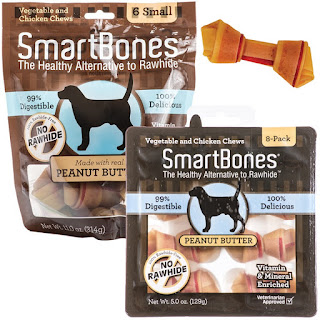 Smart Bones
We avoid rawhide so these are a good substitute. They don't last hours but they are a good reward. 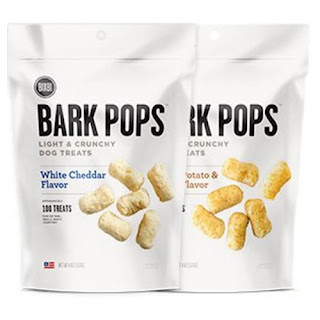 Bark Pops
Tai discovered that Houdini liked cheetos. Not the best snack for him so I discovered these at the pet food store. He'll drool when he sees the bag.

What are your pup's favorite treats or toys? I'm always on the lookout for good recommendations.

Email ThisBlogThis!Share to TwitterShare to FacebookShare to Pinterest
Labels: houdini