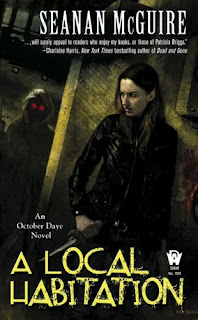 From Goodreads:
Toby Daye-a half-human, half-fae changeling-has been an outsider from birth. After getting burned by both sides of her heritage, Toby has denied the fae world, retreating to a "normal" life. Unfortunately for her, the Faerie world had other ideas...

Now her liege, the Duke of the Shadowed Hills, has asked Toby to go to the Country of Tamed Lightening to make sure all is well with his niece, Countess January O'Leary. It seems like a simple enough assignment-until Toby discovers that someone has begun murdering people close to January, and that if the killer isn't stopped, January may be the next victim.

I really enjoyed Rosemary and Rue and was very excited to see the second October Daye book out. But this one wasn't as good. October is sent to Tamed Lightening to check on her king's niece. But strange things are going in Tamed Lightening and October just gets herself into the middle of a murder mystery.
I like October. She's a smart cookie. I like Tybalt, The King of Cats. He's definitely a gray area character. He could help or he could harm October's investigation. I like to see what he does. But I was uninterested in the inhabitants of Tamed Lightening. They were a shady bunch to start and I was rooting for every single one of them to be the killer. I did like the ending and to discover how the victims had been killed. But I was racing to end without really caring what was going on. Hope the next one is better. Other reviews can be found on Darkly Reading, The Discriminating Fangirl, and Fantasy Cafe.
Posted by Linda at 3:27 AM