Thoughts on Except The Queen by Jane Yolen & Midori Snyders 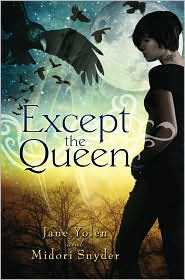 From Goodreads.com:
Sisters Serena and Meteora were once proud members of the high court of the Fairy Queen- until they played a prank that angered her highness. Separated and banished to the mortal realm of Earth, they must find a way to survive in a strange world in which they have no power. But there is more to their new home than they first suspect...

A sympathetic Meteora bonds with a troubled young girl with an ornate tattoo on her neck. Meteora recognizes it as a magic symbol that will surely bring danger down on them all. Serena, meanwhile, takes in a tortured homeless boy whose mind is plagued by dark visions. The signs point to a rising power that threatens to tear asunder both fairy and human worlds.

And the sisters realize that perhaps the queen cast them from their homes not out of anger or spite- but because they were the only ones who could do what must be done...

I saw this on The Happily Ever After... and immediately put it on my library queue. It sounded that good. And it did not disappoint.
Serena and Meterora were exiled from fairyland. Separated, they have to learn how to live in the mortal world. They each meet interesting characters (changelings, other banished fey, sympathetic humans) that help them along the way, teach them the ways of the human world. I really liked the different characters plus plenty of dark fairies. The story twists and winds through a wonderful world.
Yolen and Snyders do a good job of fleshing out the sisters and creating a magical world around them (especially for Meterora). As fey, the sisters were young but as humans they are old. I loved the contrast in their minds about how old they were. The aches and creaks they had no idea how to handle. Imagine being young for hundreds of years to wake up in your 70's. If that won't mess you up, nothing will. Then add on top that you need to learn to be human! There are some great laughs especially about the post office and some magic brownies! I highly recommend Except The Queen. Also reviewed by The Book Smugglers, Charlotte's Library, and The Spindle's End.
Posted by Linda at 3:02 AM