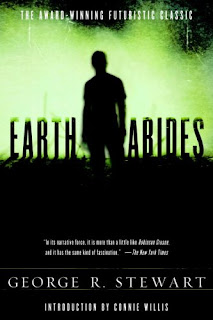 I choose to read Earth Abides after Tai mentioned while we were watching The Road. He had enjoyed it because he remembered the parts about changes in the animal population after The Great Disaster. Earth Abides was one of the first post-apocalyptic novels, written in 1949. I had 2 problems with Earth Abides. The first was the time period. I clearly don't think like someone from the late 1940's. There were references to slavery and restarting that idea. The treatment of the disabled was horrible. At one point they consider killing a possibly developmental delayed woman to stop her from producing "slow witted children". It almost seemed like Ish (the main character) wanted to create a superior race (sound familiar?). Ish irritated me. He thought everyone else stupid and himself superior. It was hard for me to finish the book since he was so condensing.
I did enjoy the changes in the animal population like Tai. After man is gone, it's easy to how the ecosystem rises and falls, stabilizing itself. When one population because too large something comes along to bring it back into balance. I also enjoyed the writing. Stewart is wonderful at weaving a story and using vivid imagery to tell the story. I didn't feel like I was being shown what was going on but painted a picture. I did enjoy that.
Overall I was meh on this one. If you enjoy older sci-fi, this might be a good choice. Others thoughts on Earth Abides: Mere Nostrum, Headed for Alien Territory and Renascencegirl.
Posted by Linda at 3:28 AM