My Name Is Mary Sutter by Robin Oliveira 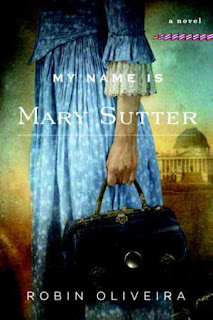 This is on my list for War Through The Generations: US Civil War. I was intrigued by a woman trying to be a doctor during the American Civil War. Actually Mary Sutter is a midwife, trying to be a surgeon.
What I enjoyed about this book is that it was told from multiple perspectives in one narrative. The perspective bounced from Mary to Mr Lincoln to Dr Stipp back to Mary. There were several characters to keep track of but each one was framed so beautifully I wasn't even confused. At times it was chaotic like war but done so gracefully that it felt like a dance.
The story carries Mary from the beginning of the war trying to find a surgeon who will teach her. It's male dominated profession and the surgeons she asks for help either ignore her or mock her. But as the war starts, Mary sees her chance. The army is looking for nurses. She takes her opportunity and finds herself in the middle of the war.
I admired Mary's determination despite the opposition she faced. Even when her mother turned away from her she never gave up her dream. Mary found a way to succeed even when no one believed in her.
I enjoyed this beautiful story that frequently showed the horror of war. There was plenty of descriptions of what war does the human body. The book was rich in details about the war. Recommended to those who enjoy stories about strong women characters and the American Civil War. Others who shared their thoughts on My Name Is Mary Sutter: Bibliophile By The Sea, The Lost Entwife and My Friend Amy.
Posted by Linda at 3:58 AM