The Orchardist by Amanda Coplin 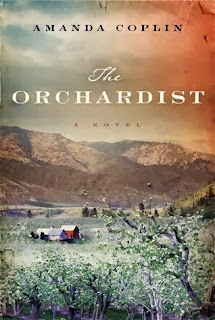 I added The Orchardist after seeing it on someone's blog. Since it was set in Washington State, I was intrigued. While The Orchardist was not like most books I normally read, it was a great read.

Talmadge lives alone in a cabin in his orchard. He's lived most of his life in this cabin. He's outlived his mother and perhaps his sister. It's a lonely life. One day while selling apples in town, he meets two young pregnant sisters, Jane and Della. Jane and Della steal apples from Talmadge. Since he does not chase them or send the law after, the girls decide to follow Talmadge to his home. The girls distrust Talmadge at first but slowly grow to see him as a friend. The book follows Talmadge, Jane, and Della for several years.

The Orchardist was one of those slow books. Very little happened quickly. But that's what made it so enjoyable to me. Coplin was very deliberate in her actions and pacing. The writing was so beautiful. Even though it moved slowly, The Orchardist kept me engaged.

I'd recommend The Orchardist. It was a beautiful story. I look forward to Coplin's other books. Thoughts from others who read The Orchardist: Caribousmom, Between The Covers, That's What She Read, The Betty and Boo Chronicles, and Write Meg!.
This was my thirteenth read for the Historical Fiction Reading Challenge.