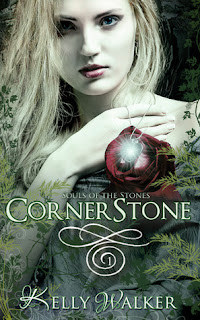 Cornerstone was one of those free Kindle books I picked up. It had good reviews so I decided to check it out. Overall I enjoyed it and will continue with the series.

Emariya (Riya) and her brother, Reeve are the "royalty" of her country, Eltar. Their parents had been on the Council and her father had led the Council for many years, until his disappearance. Now Eltar is threatened by its neighbors. Eltar has little defenses and alliances need to be made. Riya and Reeve are looking toward another neighboring country, Thalmas, to help them fight the evading Sheas. When Thalmas offers assistance, Eltar is eager to accept it but the prince of Thalmas wants Riya's hand in exchange. Will Riya be willing to marry a stranger for the safety of her country?

At first I was a little confused. I think Cornerstone had come up under a search for historical fiction but it was YA fantasy. But once I realized that it was fantasy, it was all good. At first I wasn't sure what to make of Riya. She wanted to help her country but she wanted to live her own life. She's not the princess but she's the closest thing to it in Eltar. I really liked the relationships she had with friends, Jessa and Garith.  Jessa is technically her maid but since they have grown up together, they are good friends. Jessa helps Riya figure out what she wants and helps her listen to herself. Garith has also been Riya's friend since childhood. But Garith loves Riya and Riya doesn't love him in that way. I liked the unrequited love bit. It felt genuine to me. The story was interesting, a little slow at the beginning but picked up significantly toward the end.

OverallI enjoyed Cornerstone. It took me a little bit to get into it but once I did it was an enjoyable read. I look forward to continuing the series. Others who shared their thoughts on Cornerstone: The Passionate Bookworms, Books for A Delicate Eternity, and Never Too Fond of Books.
Posted by Linda at 3:17 AM