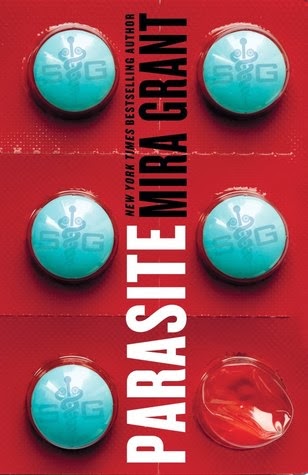 I was a huge fan of Grant's Feed series so when I heard she had a new series coming out, I couldn't wait to get my hands on it. I was not disappointed. I'm going to enjoy Parasitology just as much as the Feed series.

Parasite starts with Sally Mitchell in a hospital, dying. She's been in a major car accident and the doctors believe she's brain dead. The doctors are trying to convince Sally's family that it's time to pull the plug when Sally wakes up. Only this Sally has no memory of her prior life. In fact she needs to learn to speak, walk, read, and interact with people all over again. Sal has a second chance at life.

If you are looking for a creepy, well written, non stop thrill ride, then read Parasite. Especially if parasites and bugs don't bother you. I don't know if the science was sound but it sounded downright creepy. Grant also has a talent for writing awesome characters. I immediately liked Sal and wanted to know more about her. I enjoyed her interactions with her family and her boyfriend, an adorable science nerd. I loved that Sal and her boyfriend collected carnivorous plants.

I'm looking forward to continuing the series. Others who shared their thoughts on Parasite: The Well-Read Redhead, That's What She Read, The Lost Entwife, and My Books. My Life.
Posted by Linda at 11:17 AM