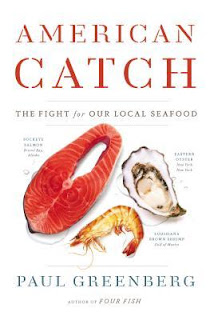 I picked up American Catch because food related non-fiction is my favorite. I especially love learning about foods I like. I eat salmon weekly, oysters when I can and shrimp often (anywhere from weekly to monthly depending on the season). I eat a lot of local oysters. But I knew the shrimp and salmon was frequently not local. I didn't know American Catch was going give me so much information that would make it hard for me to buy cheap foreign shrimp again.

Greenberg tells the stories of the New York oyster, the Louisiana brown shrimp, the Alaskan Sockeye Salmon. I knew Manhattan had stopped having oysters in their waters a long time ago but I didn't really know why. The reason its hard or impossible to find local seafood is because man is destroying much of America's coastline. Shrimp and oysters thrive in those marshy areas on the coastline. Salmon is being negatively impacted by mining. Half the time, I kept murmuring what can I do? So much has already been done. Well, I can stop buying foreign shrimp and salmon. Choose wild salmon and shrimp. Stop buying farmed fish and shrimp. It's going to be hard a lot of our American seafood goes to foreign countries because they'll pay more than we will. We get the cheaper seafood from foreign countries. The process is hurting both sides. Americans prefer farmed fish and shrimp  but it's hurting our health (farmed fish can have dangerous chemicals and it can be less nutritious) and our coastlines. And in the countries that farm our fish, the farms have a negative impact on the land and agriculture of the country. Also tell your congresspeople to vote no on bills and laws that could damage our seafood supply and destroy our coastlines.

American Catch was very informative but not in a preachy way. I would read  more of Greenberg's work. He's very knowledgeable and passionate about fish.
This is my fifth read for the Foodies Read Challenge. 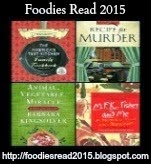