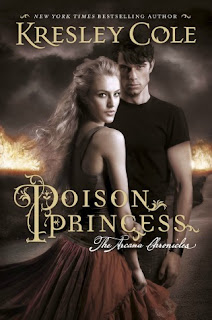 Evie is a regular 16 year old girl. She's a cheerleader, has a hunky boyfriend, and terrifying visions of death and destruction. One day, her visions start coming true and she is thrust into action. Accompanying Evie on her journey is her gorgeous, from the wrong side of the tracks classmate, Jackson. Will Evie survive? Will more of her visions keep coming true?

Evie is no Katniss. She can't hunt or defend herself very well. She manages well just after the devastation but she's pretty spoiled and used to having things handed to her. Jackson has never had anything handed to him and has had to fight his whole life. Now that everyone else does to means Jackson has to work hard to keep himself and Evie alive. But even though Evie isn't a born leader or super crafty, I still liked her. She did want things to back to before but I think most people would. I also liked that Evie kept her wits about her when it came to Jackson. Drop dead gorgeous and looking to make Evie his bed mate, Evie doesn't let him deter her from her goal. There are definitely some steamy parts.

Overall I enjoyed Poison Princess and I'm looking forward to getting my hands on the next in the series, Endless Knight. Others who shared their thoughts on Poison Princess: Love Vampires, Biblodaze, and Book Chick City.
Posted by Linda at 3:49 AM