Review: Zumba Fitness 2 for the Wii 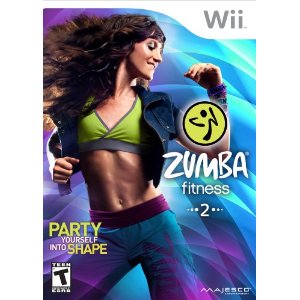 I've been going to Zumba classes for the past 2 years. I love Zumba. But recently I wasn't excited to go to class. The classes have been super packed. There are 2 new gyms opening near me soon so I was hoping to hang on and keep going to the overcrowded Zumba classes until the new gyms opened. But I found myself wanting to skip classes more and more.
I decided to buy the Zumba 2 game for the Wii. When I was at Gamestop they only had the second one, not the first. The gal at the register said she heard this one was better. Does anyone have the first Zumba? Any thoughts?
I did want to buy Zumba for the Kinect but we don't have one and I wasn't willing to shell out the cash when I bought the game. Maybe another day.
Anyhoo, I've had the game for about a month. I like being able to do the workout when I want, when I want. I get the same workout as the class. In fact a lot of the songs and moves are just like the class. I would recommend this to someone who wants to learn Zumba before heading to a class or someone who's enjoyed the classes but can't attend them for whatever reason.
My favorite songs are Pause by Pitbull:

I couldn't find the Wii version but the Kinect has the same moves. This is the same choreography that we would do in class.
Poison by Nicole Scherzinger:

I would never listen to this song outside of the game, but it's a great workout song.
Caipirinha:

I loved this one in class.
What I don't like:
Overall two thumbs up!

Disclaimer: I bought this game with my own money and no one asked me to write this post. I really like the game and wanted to share my thoughts.
Posted by Linda at 3:00 AM