I Shall Be Near To You by Erin Lindsay McCabe 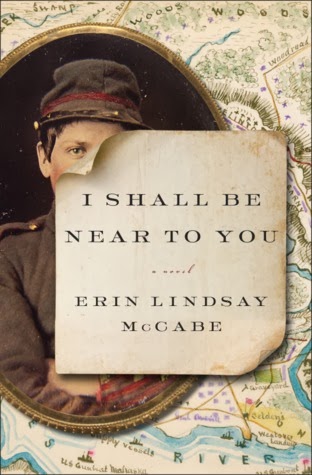 Rosetta doesn't spend her time learning to knit or cook like her sister. Rosetta prefers to be on the farm, tending to the animals, or fishing. It's her can do attitude that catches Jeremiah's eye. Jeremiah would like his own farm someday and Rosetta would be able to help work it with him. Their common goals bring them together and they fall in love. The American Civil War starts and Jeremiah decides to join up. The Army is paying good money and that will enable them to buy their farm faster. Rosetta stays at his family's farm but doesn't feel good about being separated from her husband. A few days after Jeremiah leaves, Rosetta sets off after him and joins the army as Ross Stone.

It's unclear how many women fought the American Civil War as men. But there is anecdotal evidence of many women fighting in war. Every a few women who were pregnant fought and died at many battles. I loved the spunk that Rosetta displayed. She can't sit idle while Jeremiah puts himself in danger. She attempts to help her family but is turned away as she has a new family. I loved all the detail McCabe put into the story. I really felt like I was there with Rosetta. Between the battles and life in the army, I really felt the difficulty that Rosetta and the other soldiers faced.