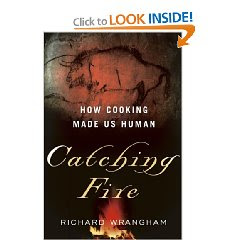 From Publishers Weekly
Contrary to the dogmas of raw-foods enthusiasts, cooked cuisine was central to the biological and social evolution of humanity, argues this fascinating study. Harvard biological anthropologist Wrangham (Demonic Males) dates the breakthrough in human evolution to a moment 1.8 million years ago, when, he conjectures, our forebears tamed fire and began cooking. Starting with Homo erectus—who should perhaps be renamed Homo gastronomicus—these innovations drove anatomical and physiological changes that make us adapted to eating cooked food the way cows are adapted to eating grass. By making food more digestible and easier to extract energy from, Wrangham reasons, cooking enabled hominids' jaws, teeth and guts to shrink, freeing up calories to fuel their expanding brains. It also gave rise to pair bonding and table manners, and liberated mankind from the drudgery of chewing (while chaining womankind to the stove). Wrangham's lucid, accessible treatise ranges across nutritional science, paleontology and studies of ape behavior and hunter-gatherer societies; the result is a tour de force of natural history and a profound analysis of cooking's role in daily life. More than that, Wrangham offers a provocative take on evolution—suggesting that, rather than humans creating civilized technology, civilized technology created us.

I've been reading more nonfiction especially surrounding food. I added this one to my tbr list because Tai and I had a conversation about how people started cooking food. This book doesn't confirm any theories how cooking food started, but it does show why we eat cooked food.
The first part talks about raw diets for humans vs cooked food diets. I had been toying with trying a raw food diet. But this book changed my mind about it. I certainly don't disagree that some foods are better raw and help cleanse your body, but switching to an entirely raw diet can actually give you less energy over the long term.
The second part talks about how cooked food helped humans evolve to modern man and why cooked food is better for us. Although too much soft food can lead to obesity. And the third part talks about the sexual division of cooking. All but 4 societies around the world the women do the main cooking for the household/community. Good to know it's not just us. The four societies where men do the main cooking are all reliant on breadfruit. And to break down the breadfruit into a mash requires a lot of strength so men get together as a group to make it.
Anyway, Catching Fire taught me more about how cooking food changed our species. There was a lot of anthropological and biological information that was more than I ever wanted to know. I would recommend this if you were really interested in the evolution of humans and how cooking contributed to it.
Posted by Linda at 6:29 AM