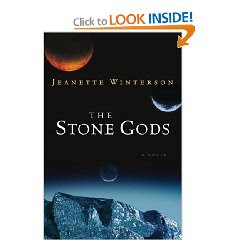 From Publishers Weekly
Prize-winning Brit Winterson applies her fantastical touch to a sci-fi, postapocalyptic setting. Heroine Billie Crusoe appears in three different end-of-the-world scenarios, allowing Winterson to explore the repetitive and destructive nature of human history and an inability (or unwillingness) of people to learn from previous mistakes. In the first section, inhabitants of the pollution-choked planet Orbus have discovered Planet Blue (Earth), and soon set about launching an asteroid at it to kill the dinosaurs that would prevent them from colonizing the planet. The second and third sections are set on Earth in 1774 and then in the Post-3 War era. Though passionate condemnations of global warming and war appear frequently, the book also contains a triptych love story: Billie meets Spike, a female Robo sapien capable of emotion and evolution, and falls (reluctantly) in love with her. In each of the scenarios, Billie and Spike (or versions of them) fall in love anew while encroaching annihilation looms in the background. Winterson's lapses into polemic can be tedious, but her prose—as stunning, lyrical and evocative as ever—and intelligence easily carry the book.

I don't think I understood this book. I read the first third and really like it. But then the next part didn't make any sense to me. The last part made more sense but I knew what was going to happen.
The same two characters meet in each part. They fall in love as a catastrophe looms. The first time they meet really sucked me in. I really liked Billie. She struggled against her feelings. She made sense to me. The world was slowly dying and she found a life worth living. The dichotomy of that was striking.
I can't really recommend this book and I can't not. I'm sort of conflicted. If you do read, let me know if I missed something.
Posted by Linda at 6:22 AM