On Sunday, I went to my first comic con. Yes, this was entirely my idea. I'd love to go to the ComicCon in San Diego but it's not going to happen this year. Someday I'll make it. So I dragged my loving husband to the Emerald City Comic Con.
I'm going to be honest with you. I was pretty nervous about going. I'm not really a geek. Sure I have some Magic cards and I read graphic novels, but I don't know every cast member of Star Trek. I was convinced someone was going to ask me something I didn't know and I would feel bad. So we went through the entire comic con without me stopping once. When we reached the end, I said let's go. Tai knew I hadn't seen anything and insisted we go through it again. I expressed my fear and Tai reassured me that people wanted to answer questions and be helpful. So back through we went. And this time I enjoyed myself.
As we were walking we discovered we missed an entire row. This row was where it was for us. We rounded the corner and I saw a table covered with my favorite graphic novel, Strangers In Paradise. I thought it might be a store selling them but no, the artist, Terry Moore was sitting there, drawing. I talked to the woman next to him. She told me about his new graphic novel, Echo. 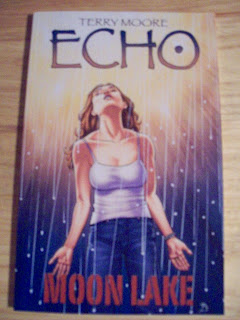 I bought the first book and Terry signed it. I had goosebumps!
Now that we were having fun. We stopped at the free swag table and got a couple of free graphic novels. 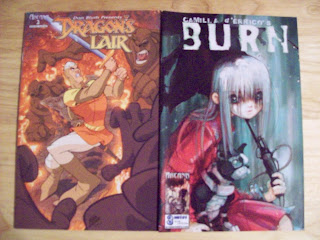 Dragon's Lair and Burn. I like the cover art on Burn.
I also spotted Kirby Krackle which I heard about on notmartha. Tai and I gave the CD a listen and decided to buy an album. 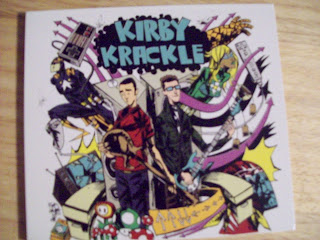 Then Tai noticed The Art of Dave Correia and stopped and talked to the artist. Dave Correia did the graphics for the Little Deivants Scion car ads:

Tai liked so much of his stuff but decided on a couple of his books. 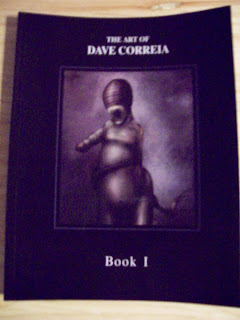 I think we'll probably buy some of his art later.
These caught my eye: 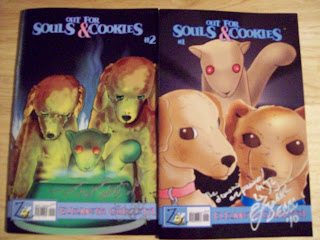 A comic book about 2 dogs who are also demons, Out For Souls & Cookies. It's set in Seattle which I love. It's too cute.
I enjoyed the comic con. I can't wait for next year.
Posted by Linda at 3:49 AM