Over the weekend, my friend Michelle hosted a late Cinco de Mayo party. Knowing that most people's idea of Mexican food is covered in cheese, I brought food Tai could eat since he's lactose intolerant. So I made pork carnitas and arroz con pollo (which isn't a mexican dish anyway). Mom used to make arroz con pollo but she took that recipe with her and I had little idea what went in it. But I stumbled on this recipe for arroz con pollo and thought it sounded good and somewhat easy for me to make. 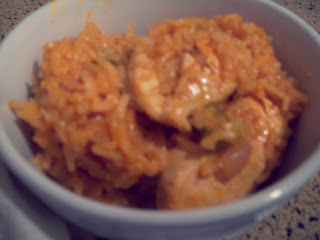 Several people thanked me for making it since they really enjoyed. My friend April thought it was good but different than hers. She invited me and Tai over to learn how to make it her way. I'm looking forward to that!
Definitely a great dish to bring to a potluck or serve to a lot of guests. This recipe easily makes enough for 8 hearty servings.