Born Round by Frank Bruni 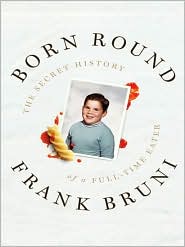 I added Born Around to my to be read list after reading about it on Omivoracious. I'm really glad I did. Born Round is the story of Frank Bruni, New York Times restaurant critic. The story starts when Frank was growing up in New York, follows him throughout his life-college, living in Rome, following George W Bush's campaign. First off I love the way Bruni writes. There is a certain amount of reflection in his stories but he's pretty honest about how he remembers.
Bruni grew up in a household where food equaled love. I grew up in a similar household. To turn down an extra helping of dinner or dessert was tantamount to saying I don't love you. What child wants to see the hurt in his mother or grandmother's eyes after turning down food. The stories about family dinners and the amount of food his family served reminded me about our own family feasts. Bruni struggles with his weight his whole life. He even turns to bulimia to try to control his weight. As someone who also struggles with my weight I could identify with a lot his inner thoughts and his attempts to stop eating, to control his appetite.
I especially loved the part toward the end when he becomes a food critic. At that point Bruni's taken up exercise and found a slightly more balanced view of food so his weight isn't what he talks about. It's more about the struggles of being a food critic. How to reserve a table without restaurant staff knowing it was him. How to pay for a meal without tipping off the staff. And writing honest reviews when chefs, restaurateurs, and their mothers write to Bruni imploring him to give them better ratings. I laughed a couple of times at the follies of being a restaurant critic.
I recommend this book especially to those who love food, those who struggle with their weight and those who enjoy a good honest memoir. Others who shared their thoughts on Born Round: KyusiReader, Bella In Lapbandland, and Food Food Body Body.
Posted by Linda at 3:40 AM