Thoughts on The Passage and Feed

I wanted to read both The Passage and Feed close together. Since they deal with similar topics (a virus that infects out most of the human race) I thought it would be interesting to see how they compare. Overall I liked Feed better. The pacing was better and the story line was clearer. But both were terrific first books in a series and I look forward to continuing the series.

Feed is the story of Georgia, a blogger, who reports about life after the virus has hit. In Feed the virus is dormant within you but you need a trigger. Usually a bite or scratch from an infected person can cause the virus to activate. Georgia and her brother, Shaun, operate a blog about the zombies and life in America after the zombies have risen. Georgia and Shaun hit the big time when they are the first bloggers asked to join a presidential campaign. There's a lot more action overall in Feed. Shaun is an "Irwin" (like Steve Irwin) and his job, his thrill, is to provoke the zombies in order to get footage for the blog. So there are plenty of zombie encounters. I also enjoyed the banter between Shaun and Georgia. Both are fantastic characters, really well written. I also liked Buffy. I was disappointed in her storyline but understood what it added to the book. I did not like the end (really pulled the rug out from under me), but I can see where they are going with it.
Others who read Feed and posed their thoughts: My Friend Amy, Devourer of Books, and Vampires and Tofu. 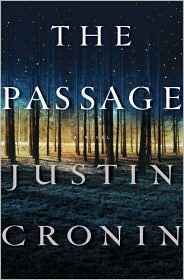 In a review I read someone said The Passage was really 2 books in one. And that is a true statement. The first part of The Passage is the beginning, not just the beginning of the book but how everything started. The second part was about the after but not necessarily about the same characters in part one. Confused? Yeah I was. Nothing I hate more than investing 100's of pages caring about a character to have them disappear halfway through the book. Grr.
I really liked the first part of The Passage. A little bit of mystery, a government experiment (named Project Noah) to help people live longer. A girl on a journey, meeting those who will help and hurt her along the way. A broken man looking for a way out (actually that describes 2 characters). What's going on? What will happen? And plenty of action for me.
The second part is a little less action packed (til the end of the book, then there's more action). I feel like I would be giving away spoilers if I told you a lot about this part. But I grew to love some of the characters in the second half especially Alicia.
Oh and the creatures. In Feed they are zombies. I want to eat your brains zombies. In The Passage they are a cross between vampires and zombies. A little of both. They want to eat you. They want your blood.  They don't like the sun. They are killed by a shot to the breastbone, heart area. Both are equally terrifying.  I don't want to live in either world. Well Feed wins out a little bit since there are secured areas.
Those who read The Passage and shared their thoughts: One Person's Journey Through Books, Jules' Book Reviews, Reading With Tequila, Olduvai Reads, Layers of Thought, and Chaotic Compendiums.
Posted by Linda at 3:26 AM