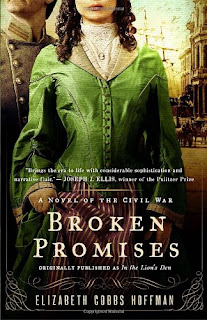 Once I read the summary of Broken Promises, I put it on my library queue. I also think the cover had something to do with it.
Broken Promises really is two stories that are sort intertwined with each other. First we have Charles Adams who has traveled to England as the Union's ambassador. And then we have Julia Birch, a young woman living in England. I was far more interested in Julia's story than Charles' but that's cause his had a lot more war related. Charles, as the the ambassador, is trying to help the Union and stop English businessmen from assisting the Confederacy. I had no idea that the English helped the Confederacy during the American Civil War. I did enjoy hearing about what England thought about the war and what international sentiment was like, but there was too much war discussion for my liking. Although I did enjoy hearing about Charles' personal life, his wife, Abby and their son, Henry. Those interactions made his portions more tolerable.
But Julia's story was way more interesting. First, she's a woman in Victorian England so she butts up against society and her father's expectations of her. Then there's the romance factor between her and Baxter, Henry's friend. He's a Southern, very scandalous. Navigating English society with Julia was intriguing and just the right amount of Victorian romance novel for me.
Recommended especially for those who enjoy historical novels. Others who shared their thoughts: Gardening Literature and Books By Dona.
This was the fourth book I read for the War Through The Generations challenge.