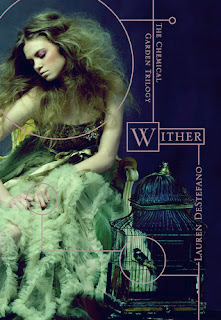 I was pretty excited to see Wither sitting on the library shelf. I've been seeing such good reviews of it so I eagerly grabbed it. Overall the story was ok. I think I was expecting much more.
I thought the world Wither is set in was pretty cool. Everything but the United States is gone and most of the United States is pretty desolate and war torn. In an effort to make humans more resilient, children are "manufactured" so they don't get sick. The process backfires and girls die at 20 and boys die at 25. At 16, Rhine is kidnapped and brought to marry Linden. All she wants is to leave his mansion and go home to find her brother. Rhine is pretty overwhelmed with everything, becoming one of Linden's wives, being thousands of miles from home, the whole being drugged and kidnapped. She was as her brother called her, too emotional. She spent a lot of time being upset. I was hoping she'd be more like Katniss. In my opinion it took too long for her to find an escape.
I really liked Jenna, one of Rhine's sister wives. I liked how Rhine related to her and Rose, Linden's first wife. I know they were trying to make Linden's dad, Vaughn, seem super creepy, but he seemed ridiculous to me. I suspected some sort of conspiracy plot to creep up which never did. I'll be interest to hear more about the virus and how it could be stopped or not.
My high hopes got in the way of true enjoyment of Wither. I'll read the second book with more realistic expectations :) Others who shared their thoughts on Wither: Booked On A Feeling, Read. Breathe. Relax, The Book Scout, Reading With Tequila, Feeding My Book Addiction, The Broke And The Bookish, Layers of Thought, Smart Girls Read, My Books. My Life., My Friend Amy, and Confessions of A Book Addict.
Posted by Linda at 3:40 AM