Time Of The Witches By Anna Myers 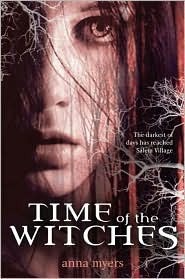 I picked Time Of The Witches off the shelf because it sounded good. With that cover, I assumed it would be a little creepy. Overall it was ok but nothing I would tell anyone to rush out for.

Time of The Witches is the story of Drucilla, a young woman growing up in Salem Village. An orphan at birth, Dru has been sent to live/work for Mistress Putnam. While there Dru gets involved in the witch hunts as Mistress Putnam is actively searching out evil in the village. Dru and her friend Gabe are fictional characters set in a real story. The book is supposed to be Dru's retelling of what happened during the Salem Witch Trials. While I'm normally a fan of books set during this time frame, Time Of The Witches fell a little flat. Even though Dru was involved in the trials, I felt very removed as if the action were happening away from the reader.
Time Of Witches was an ok read. Others who shared their thoughts on Time Of The Witches: My Life In Not So Many Words, Teen Book Review Blog and Rebecca's Book Blog.
This is the seventeenth book I read for the YA Reading Challenge.