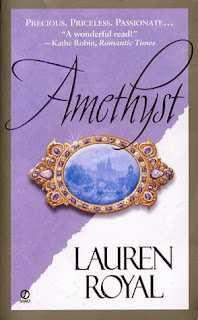 I love my iPad and have been using the Kindle app a lot. The world of free books is so alluring! That's how I found Amethyst. It had good reviews so I decided to give it a try. I was not disappointed. Amethyst was a great historical romance.

Amethyst lives in London and the book opens with the return of Charles II. Amy (Amethyst) meets a dashing green eyed stranger. Years go by and the green eyed man still lingers in Amy's mind even though she's betrothed to her father's apprentice. One day the green eyed man comes in her father's jewelry shop and Amy still feels an intense attraction to him. The green eyed man, Colin, is intrigued by Amy. But since he's a lord and she's a commoner, he tries to put her from his mind. During the London Fire, Colin rescues her from the fire and takes her home. Once Colin's family mets her, Colin and Amy find it hard to resist each other.

I liked both Amy and Colin. Amy is stubborn and devoted to doing things her own. Colin's family had been exiled with the King. Colin is determined to keep his family safe and is looking to marry a titled woman. Despite their attraction, both believe there is no future for them. I liked the fact that Colin and Amy care for each other deeply. Neither of them wants the other to be hurt. I also really liked Colin's family especially his sister, Kendra. They were a fun, lively bunch.

I'll be continuing the series. I've already downloaded the next in the series, Emerald. I was unable to find others who shared their thoughts on Amethyst on a blog :( If you read Amethyst, let me know!
This is my fourteenth read for the Historical Fiction Challenge.