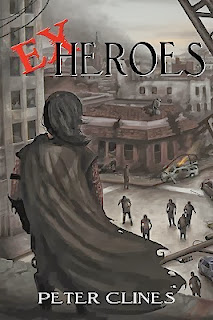 I added Ex-Heroes to my library queue because it sounded like something I would want to read. Zombie? Check. Superheroes? Check. A ringing endorsement from a couple of my favorite authors? Check. Ex-heroes was all those things I wanted but didn't push past typical stereotypes.

There was plenty of action in Ex-Heroes. The story moved fast and it felt kind of like a movie. But the superheroes back stories were so tired. A beautiful woman who wants people to look past her beauty so she hides behind a mask. An aging superhero who feels guilty for those he couldn't save. A beast who's hell bent on revenge. This is the first in a series so hopefully the characters dig deeper and give me more to care about in the next book.

Great action read. A lot of fun and very little substance. I'll pick up the second in series (Ex-Patriots). Others who shared their thoughts on Ex-Heroes: Mom Read It, A Bitter Draft, My Shelf Confessions, and What Mark Read.
Posted by Linda at 10:43 AM