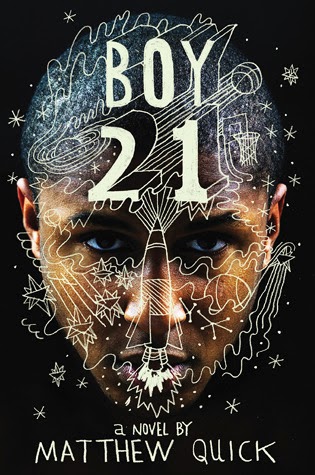 I added Boy21 to my library hold list after reading April's review. I enjoyed Silver Linings Playbook so I knew I wanted to read more books by Matthew Quick. Boy21 is one of the best books I've read this year. It's going to be hard for me to not read more of Quick's books this year.

Finley is going to be a senior this year. There are only two things that he loves-baseketball and his girlfriend, Erin. Finley is a man of few words. It's hard to see at the beginning if he's unwilling to talk much or if something is restraining him. This summer is like no other at the start. Finley and Erin spend each day practicing for the upcoming basketball season. All is normal until Coach asks Finley to help a new student, Russ aka Boy21. Boy21 is moving to Finley's school after his parents were murdered. In order to cope with their sudden passing, Russ imagines that he's an alien and his parents are coming in space ship to take him away. Russ is also a basketball player and, according to Coach, one of the best. Will Finley be able to help Boy21? Will Boy21 take Finley's spot on the basketball team?

I don't read many books with male protagonists so this one was kind of unique for me. And even though I watch basketball, I didn't know much about the positions and the techniques. Quick does a great job about drawing you into Finley's world. It's all basketball and Erin. Erin is an absolute sweetheart. Also a basketball player, she helps push Finley. The two of them have a plan to get out of where they live and find a better life. Finley lives in an area controlled by violence, drugs, and gangs. Neither him or Erin want to live in that world.

Russ or Boy21 was an amazing character. A star basketball player with offers to play at some of the most prestigious colleges in the country. One day his parents are murdered and he turns to space to help him get through the tragedy. Boy21's pain and confusion are hard for Finley to take. But I loved the friendship between the two of them. They help each other in so many ways.

Overall, I loved Boy21. Fantastic story, great characters. An amazing read. Others who shared their thoughts on Boy21: Good Books and Good Wine, YA Love, I Like These Books, and Read Many Books!.
Posted by Linda at 3:25 AM