In A World Just Right by Jen Brooks 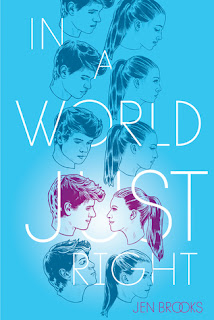 I heard about In A World Just Right from one of those best of the month lists. A boy who could create worlds? Sounded interesting. It took a long time for me to like In A World Just Right, then I felt the rug get pulled out from under me, but I thought the end was fitting.

Jonathan survived a horrible plane crash that took his mom, dad, sister, his aunt, and her unborn baby. At first he was in a coma but when he came to, he was covered in scars. He found it hard to make friends and isolated himself. In his isolation, he discovered he could build alternate worlds. He could disappear from the real world and lose himself in this other worlds that suited his needs. One day he creates a world where his crush, Kylie, loves him. He's happy in that world but keeps returning to his real world. He desperately wants real Kylie to love him like girlfriend Kylie. He struggles to stay in the real world and wants girlfriend Kylie to be real. By accident, he attempts to kiss real Kylie mistaking her for girlfriend Kylie. Then these two worlds seem to start to meld.

Jonathan was understandably lonely and in so much pain. I did want to understand him but he was really selfish, it was hard for me to like him. Then, just as I starting to like him and understand him, Brooks threw in a huge curve ball. That took me a while to deal with but I like where Brooks took the book. For me, the idea of how to be happy was so integral in this book. Do you make yourself unhappy by ignore the happiness around you or do other people make you unhappy? It was an interesting read and a lot deeper than I was expecting.

I enjoyed the sci-fi aspects of the book. It was too angsty for me in parts. I didn't like the main character, Jonathan, enough to want to recommend this book. If it finds its way to you, read it. I wouldn't really seek it out. Others who shared their thoughts on In A World Just Right: YA Midnight Reads, Afterwritten and Willa's Ramblings.
Posted by Linda at 3:49 AM