The House You Pass On The Way by Jacqueline Woodson 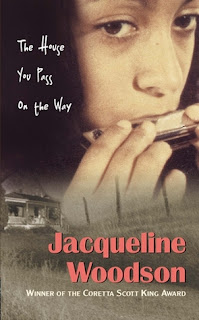 Staggerlee lives with her folks in the rural South. Staggerlee's grandparents were musicians and activists. Staggerlee's father is just a working man. Staggerlee is half white, half black. It's just one reason she doesn't fit in this town. Staggerlee also likes girls. No one's told her not too but she suspects that she's not like everyone else. One day, her cousin, Trout, comes to town and Staggerlee has found someone like her. Besides homosexuality, The House You Pass On The Way also address being biracial which I liked. It's a tough topic and I felt that Woodson could have delved deeper. But I felt that way most of the book.

I liked The House You Pass On The Way but Woodson introduces so many characters. Mostly Staggerlee's whole family. They seem so interesting. I would have liked a longer piece about all of them. But Staggerlee is interesting and her relationship with Trout is good but brief. I hope to encounter Staggerlee again.