Also titled the one where Linda breaks her own rules.

For the last 6 years I haven't had a tree. I love real trees but hate the needles. I didn't want a fake tree since it wasn't what I really wanted. I rather have nothing than something I don't want. But this year I really wanted to display ornaments. I wanted an ornament tree. 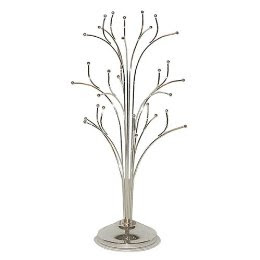 But I couldn't find one in the stores that I liked so I was going to make one using manzanita branches. 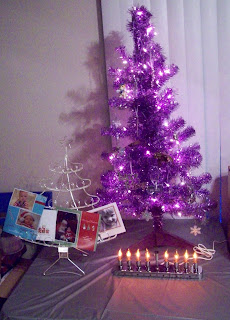 Yes, it's purple. I wanted to make sure if I was buying a fake tree I wanted no mistake that it was fake. The card holder is something I bought years ago at Hallmark. I love displaying our holiday cards there. And then we have my electric menorah. I got it as a gift a few years ago. My other menorahs are still hidden in a box somewhere.
I'm already for the holidays now!
Posted by Linda at 6:20 AM

Email ThisBlogThis!Share to TwitterShare to FacebookShare to Pinterest
Labels: holidays