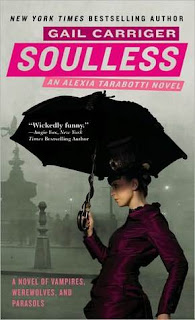 While talking to a friend at work, she mentioned she was reading Heartless. She asked if I had started the series yet and I told I wanted to but hadn't yet. She brought me the first three books in the series the next day. I love having such gracious friends.
Ok first off can I say how much I hate that cover. Why is she posed in such a ridiculous manner? Great book, terrible cover!
So Alexia's got no soul. She's a spinster. She's half-Italian. She's too dark complected. She's too smart. Enter Lord Maccon (swoon!), a dashing werewolf who she winds up at odds with. At the beginning I wasn't sure I would like Alexia. For all her book smarts, she seemed a little daft. But she quickly won me over. Despite being in the same time period as the Gardella Vampire Chronicles, the language and therefore the feeling of the book makes the book feel as if it was written in the later 1800's. I quickly became engrossed in Alexia's world and I loved how Carringer made everything flow. Yes, there are vampires and werewolves but this is no Twilight. Alexia's world is a little different than other fantasy books I've read, even the other steampunk books I've read. It's really a world of its own (just delightful really).
Highly recommended. Others who shared their thoughts on Soulless: Book Girl of Mur-y-Castell, Book Addict, Zoe Reads, and Book End Babes.
Posted by Linda at 3:08 AM