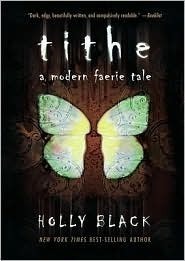 Ever since I first heard of Holly Black's Modern Faerie Tales, I'd wanted to read them. Sadly it took me this long to start the series. I love faeries and these are the kind of fey I like-dark, prone to destroy humans and wicked.
After her mother's band breaks up, Kaye returns to New Jersey, her childhood home. When Kaye was growing up she had "imaginary friends", three faeries that she played with. Kaye tries to find them when she returns to New Jersey but has trouble finding them until she meets the mysterious Roiben. The faeries need her help and warn her of Roiben's evil deeds. Kaye quickly finds herself trapped between her faery friends and Roiben.
At the beginning I had a hard time getting into Tithe. Partly because the hype was great. But more because (tiny spoiler) Kaye's a changeling. I'm so tired of the changeling angle. I imagine when this book came out, it was novel. Now it's so tired. But the story moved quickly enough from that and I quickly became engrossed. Black's writing is so enchanting that I forgave her for any faults. I can't wait to read more of Kaye and Roiben's story (and Corny too).
Highly recommended to those who like dark faery stories. Others who shared their thoughts on Tithe: Good Books & Good Wine, The Happy Booker, Books From Bleh to Basically Amazing, and The Book Nerd Club.
This was my twenty-fourth read for the 2011 YA Reading Challenge.

This was the fifth book I read for the 2011 TBR challenge.