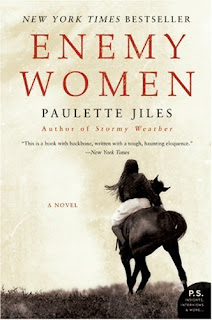 For this week, each of us had to read chapters 7-15.  These chapters follow Adair Colley and her plight in the women’s prison near St. Louis.
How would you compare Adair’s thinking to that of a more traditional southern woman, like Rhoda?
Adair is more modern than Rhoda. She isn't afraid to voice her opinion and doesn't feel that she should demure to men. I also thought this might have been the way and where Adair was raised. Adair lived in the country, having to work to eat and survive. Rhoda probably had servants and was raised in a more urban area.
Describe the relationship between Adair and Major Neumann.  Is it believable? Do you think the war has influenced it and in what way? Has their plight moved you?
At first I didn't believe it. Neumann seemed to find all the girls tempting. I wondered how many others he gave favors and tea too. But when Adair shared about her family in the first "confession" I think something changed for the Major. For Adair I think he was a way out. Easily manipulated, a game. If he wanted her to enjoy his company and give her gifts, she would thinking that a release would be the final prize.
What do you make of Adair’s “confessions?”  Do you think she should have followed Major Neumann’s advice and given them anything plausible just to be released?
I wonder in any war how many "confessions" are giving just to obtain what reward is dangled. I assume a lot. A captor is asking you to betray friends, family and country. A lot of people probably give false information. I found the reason that Adair found herself in prison to be weak. There was no trial, no checking to see if she was a traitor. Just someone's word and she was locked up in jail. I felt Adair's injustice and I won't make something up just to get released. I understood her point there.
What is your overall impression of the book at this point?  Are you enjoying it more?  Less?
I'm enjoying the story. I want to know what's going to happen with Major Neumann. I hope Adair can get out of jail. The writing is beautiful, makes it hard to put the book down.
Posted by Linda at 3:38 AM

Email ThisBlogThis!Share to TwitterShare to FacebookShare to Pinterest
Labels: readalong, War Through The Generations challenge 2011