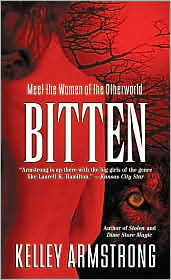 It's not easy to find a fresh angle for the werewolf theme, but this debut novel from a Canadian writer proves that solid storytelling and confident craftsmanship can rejuvenate one of the hoariest of all horror clich?s. Elena Michaels is a self-described "mutt," a werewolf who left her secretive pack in upstate New York for a life among humans. In the year since she relocated to Toronto, she's embarked on a career as a journalist and begun a pleasingly mundane relationship with a decent man. All this is jeopardized when she agrees to help her old packmates hunt some troublesome mutts who are converting common criminals to werewolves and leaving a trail of conspicuous carnage. Reunited with her former lycanthrope lover and forced into brutally predatory confrontations, Elena finds the call of the wild subtly reasserting itself. Armstrong prepares readers for her tale's twists with several key revisions of werewolf lore the werewolf taint is mostly hereditary, and werewolves can be killed as easily as any human or wolf. Her true achievement, though, is her depiction of werewolf nature in believably human context. Elena's feral sensibility, like her psychological vulnerabilities, seems a natural outgrowth of her abusive childhood, and her relationship with the pack is that of any prodigal child to a close-knit family. The sensuality of Elena's transformations and the viciousness of her kills mesh perfectly with her tough personality. Filled with romance and supernatural intrigue, this book will surely remind readers of Anne Rice's sophisticated refurbishings of the vampire story. Agent, Helen Heller. (Oct. 1) Forecast: The sensual, non-genre jacket design will help to signal that this novelwill also appeal to mainstream tastes. Copyright 2001 Cahners Business Information.

Tai found this book first. He was looking for some new books to read and found Bitten. Once he read it he thought I would enjoy it. I tried it and loved it. I found the characters engaging and the story fast paced. It was like reading a movie. I've read no books where the main character is a werewolf but I would certainly be on the look out for more.
Recommended especially for those who like werewolves and a little hot romance thrown in for good measure.
Other reviews can be found at All Booked Up,  My Year Of Reading Seriously, and A Little Bookish.
Posted by Linda at 7:54 PM