Review-Scent Of Shadows by Vicki Pettersson 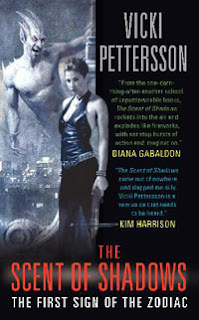 From Publishers Weekly
Despite its romance pedigree (Kim Harrison and Charlaine Harris contribute advance praise), this moody, fast-paced debut falls into the growing "dark fantasy" category, which blends fantasy, comic book superheroism and paranormal romance, but holds no promise of a happily-ever-after. The book's heroine, Joanna Archer, has spent the years following a brutal attack learning martial arts and trolling Sin City, Nev., for trouble. On the eve of her 25th birthday, she finds it in the form of a peculiar date who looks like a gaunt banker one moment and like hell spawn the next. Joanna fights her way out of his grasp, but her close encounter is only the beginning. Before long, she finds herself caught up in a world where a superhuman few—the Light—fight evil from the Shadow realm, a world in which she's recognized as the "Kairos," a prophesied warrior made up of both Shadow and Light who's destined to help Light prevail. Pettersson centers her story around the signs of the Zodiac, putting an imaginative spin on a familiar setup. Though graphic scenes (in which tongues are severed, heads ripped off, etc.) will repel some readers, others will embrace Pettersson's enduring, tough-as-nails heroine and anticipate gleefully the next volume, due in April. (Mar.)
Copyright © Reed Business Information, a division of Reed Elsevier Inc. All rights reserved.

For the first few chapters I was confused. What dark forces were working against Joanna? What was coming to harm/kill her? Who was she really? I can't say I got a good answer for anything of these questions but it was a fun ride.
I immediately liked Joanna and loved Ben. The story moves fast and you can't help but race along with Joanna. I love the superhero theme although I was looking for something else like vampires and werewolves. Tai recommended this one to me too, but he was vague on the topic of the story. Perhaps that's why I was confused. Anyway I'm looking forward to the second one.
Recommend for those who like fantasy and romance. Joanna's a strong female character who's often at odds with herself. I can't wait to learn more about her.
Other reviews found at Bitten By Books, Literaturely Speaking, and Weirdwriter.
Posted by Linda at 6:08 AM