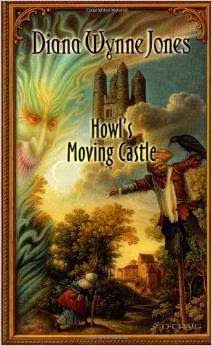 Sophie is the oldest of three daughters. In her country that means that she's the worse off. Her youngest sister will be able to leave to seek her fortune while the eldest two stay behind. But fate strikes and Sophie's step mom sends the two younger sisters to apprentice with local businesses and decides to leave Sophie the family's hat making shop. At first, Sophie thinks this will be ok but then realizes that she'll never leave her town. One day, the evil witch enters Sophie's hat shop and curses her. Sophie turns into an old woman. Worried that seeing her as an old woman will upset her family, Sophie heads out to seek her fortune. The rest of the story is about Sophie's journey and who she meets out in the world.

Sophie was delightful. Even though she was turned into an old woman, she never gave up. She kept on going without missing a beat. Sophie also brought the best out in the other characters. None of the other characters were my favorite unless Sophie was interacting with them. Michael was alright. Calcifer had some funny bits but he was better with Sophie. And I didn't like Howl til the end. Sophie's land is full of magic which I enjoyed. But it all felt so real too. It was awesome.

If you couldn't tell, I whole heartedly recommend Howl's Moving Castle. I have to watch the movie now. I can't wait to read more by Diana Wynne Jones. Others who shared their thoughts on Howl's Moving Castle: Fantasy Cafe, Whispering Words, and The Book Smugglers.
Posted by Linda at 3:24 AM