The Impossible Knife of Memory by Laurie Halse Anderson 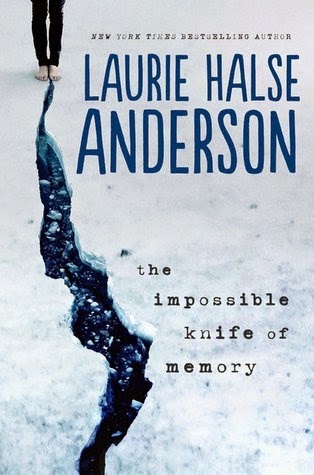 It's Hayley's senior year. Hayley and her dad have been nomadic for the last few years. Hayley's been riding shotgun in his truck as they toured the United States. But suddenly Hayley's dad decided to bring her back to his hometown. Hayley's not thrilled to have settled down but hopes it will help bring her dad some peace. Hayley's dad is a recent war vet and his PTSD keeps it hard for him to hold a job or much else. Hayley just wants to make it through school so she can try to help her dad.

I liked Hayley. She's not concerned about "normal" teen things dates, dances, clothing. But instead she worries about food, having enough money, and her dad's declining mental health. She finds it hard to make friends because most other kids of more "normal" concerns but she finds a couple of kids (Grace and Finn) who both have issues of their own. But Halse Anderson doesn't just make the book about the issues. She crafts fantastic characters who have these messy lives and gives them a chance to work it all out. Plus I was a fan of the solid ending.