Thoughts on Boneshaker by Cherie Priest 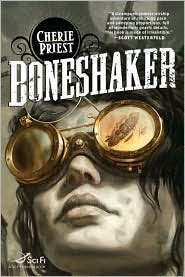 So I choose to read Boneshaker because it's set in Seattle. Ok, let me get my gripes out of the way. These didn't detract from my overall enjoyment of the book, just small irritations. Seattle is not on the ocean. Towards the beginning Brier wades in the ocean water. Yeah unless she drove to the coast, two and half hours away. Seattle sits on Puget Sound which is an arm of the Pacific Ocean. Some of the streets were wrong. I read the acknowledgments and all that was done on purpose. I sort of forgot my gripes as I got immersed in the story.
The story follows Brier and her son, Zeke, after Seattle has been infected with the Blight. The Blight creates zombie like creatures. A wall was built to keep the Blight (a gas that makes people sick) and the rotters (Zombie like creatures) in. I felt that you got to know the characters slowly. Brier had a lot to say but holds so much back from everyone. I liked how the story bounced from Brier to Zeke. It gave you a real there in the trenches feel. I also like so many of the other characters, Cly, Angeline, Jeremiah. Boneshaker appears to be the first in a series. A series I look forward to reading!
Recommended especially for fans of steampunk, zombies, and alternate history. Other reviews can be found at: Sam's Book Blog, Chaotic Compendiums, Birdbrain(ed) Book Blog, and The Crawlspace.
Posted by Linda at 3:00 AM