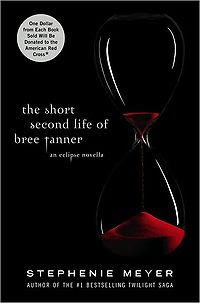 Oh Twilight how I love thee! The Twilight world is complete escapism for me. I love how I can fall into it (via book or movie) and lose myself. Rather than captivating me and letting me feel like I'm watching the characters, Meyer tends to draw me in so I feel like I'm standing with the characters, feeling what they are feeling. It's a comforting feeling.
The Short Second Life Of Bree Tanner is the story of one of the newborns created by Victoria when she was preparing to fight the Cullens. It was interesting to see the other side of the story but it mostly made me want to read Eclipse again. Bree's an easy character to like. She was headed down a bad road when she meet Riley who brought her to Victoria. She was turned before her 16th birthday. Young and thirsty she struggles with being a newborn vampire and not knowing what her future holds.
If you liked the Twilight series you will want to read this too. Other reviews can be found at The Book Scout, My Overstuffed Bookshelf, The Book Nerd Club, and The Nerd's Wife.
Posted by Linda at 3:19 AM