On Thursday I met Ashley and Marta to try a few restaurants in the Belltown neighborhood. We wanted to try 3 different places, each specialized in small plates. We thought it might be fun to try some new things.
First we hit Spur: 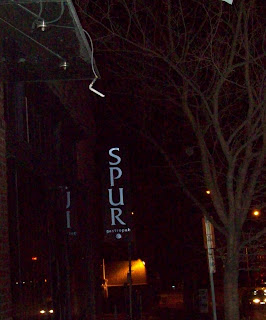 Spur was the reason we decided to try a few different places. Spur's menu wasn't varied and we thought it would be hard for us to make that our only stop. But we were surprised. The menu was on the short side but I wouldn't say their portions were tiny. I had the grilled cheese sandwich (a happy hour special) and the steamed clams. It was good. I would try it again.
But Ashley and I decided to see what else Belltown held. So we walked a block to Kushibar: 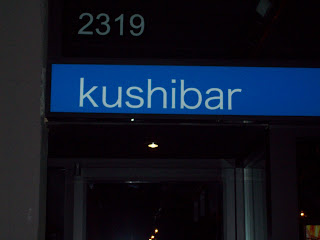 I've been dying to try Kushibar for a while. I was intrigued by the Japanese street food idea. I was not disappointed. It was hard for me not to order everything. It all looked so good. But I decided on the Agedashi tofu, the salmon skewer, and the dragon ball (scallops wrapped in bacon). The skewers are all under $5. It's easy to buy a lot and therefore have a huge bill. But you could have a small snack or light meal for cheap. I can't wait to take Tai there. I think he'll love it.
The third stop was Umi. I didn't take a picture, sorry. Ashley had been raving about Umi's sushi for a while so we treked over. It was ok. I had the octopus and Copper River Salmon. The salmon was delicious but the octopus was cut too thick for my taste. I might try it again but I was really full from Kushibar.
I definitely think we'll try the bar hopping model again. It was a lot of fun trying a bunch of new places rather than just one. And the small plates were easy on my wallet.
Posted by Linda at 7:28 AM