I have a confession to make. I love dairy. I love cheese, ice cream, and milk. I could eat nothing but dairy all day. But Tai, Tai's lactose intolerant. He loves cheese and ice cream (milk not so much) but it doesn't love him back.
I think he told me on our first or second date. It didn't seem like a big deal. He refused to eat dairy at the beginning so he'd make a good impression on me. But slowly dairy entered his diet. He hurt a lot. I tried to make food without cheese and that cut out lots of my meals. No more chicken parm, no more lasagna. I hate to start looking for other things to make.
Round that time I found Shauna's blog (if you've never read it, please go read it). Shauna is a celiac. Gluten does to her what dairy does to Tai. But Shauna's life isn't lacking from food. She eats well. Well she is married to a chef, but just because she can't eat gluten, doesn't mean she's just eating celery. So, I decided to do the same thing. I didn't want Tai to miss out on eating well just because he can't eat dairy.
You would not believe how much dairy is in everything. I was really proud of one meal only to find out the biscuits was making have real butter in them. Those biscuits aren't something I can make anymore. Sigh I'm on the look out for biscuits that don't have butter in them (I know I can make them at home, but as I learned with the bagels, I won't be making any bread products til I get a stand mixer). I'm focused on things I can make. Enter Sunday's quiche. 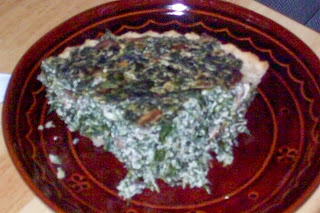 God, that's a horrible photo. Sadly this is the best one I got. I got the recipe here. There's a better photo there. I did not make the crust. I used a crust I bought at the grocery store. I just checked; it was dairy free. Yeah!
Next time I make this I will use less spinach (and take a better photo). It's a lot of spinach. But very yummy. Tai'd never had quiche so he didn't have a lot to compare it to. But he did like it. It was filling.
For dessert, I made vegan cheesecake: 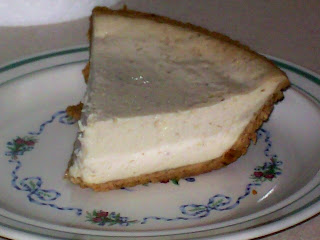 Tai wasn't as impressed as I was. The texture is very creamy which I really liked. I do think it's pretty tasty. I got the recipe from The Non-Dairy Queen who got it from here. It was definitely easy to make. I will make it again and try to make it less creamy.
I love Tai and I want him to be able to eat as well as I do. I don't want to suffer at all. Especially not by my hand. If he chooses to eat dairy when he's not a home, that's his choice. But the food I make at home will be dairy free.
Posted by Linda at 8:31 PM