I made a couple of different crusts to try. The first one was a tart crust that I used to make the fruit pies. And the second one is this pie crust recipe. But I suck at making pie crusts. Neither one worked out. I decided it was time to cut my losses and go the Sandra Lee route.

And made this little pocket pie: 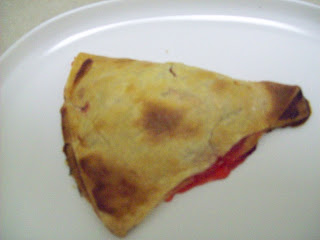 Now why did I make little pies? And not one big pie? Oh cause I was trying to recreate these: 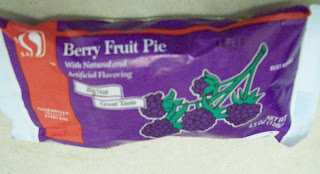 Yes we are that healthy! We bought some of these before the storm but we ran low and no one wanted to eat the last one. I was trying to decide how to make them so we could have them whenever we wanted.
The verdict? Good, not as sweet as the store bought ones. But they felt healthier. Plus built in portion control. Each crust only made four little pies and one little pie was enough for each of us. I'm definitely going to make it again.

1 pie crust
half a can of pie filling (cherry, blueberry, apple, etc)
one egg
2 Tbs of superfine sugar

Cut the crust in quarters. Put a tablespoon or so of pie filling on one side of the crust quarter. Make an egg wash with the egg (Mix egg and water). Then put some egg wash around one half of the quarter. Press the sides closed. Coat the top of pie with egg wash. Dust the top of the pie with sugar.
Cook at 350° until crust is golden brown. Enjoy!
Posted by Linda at 6:26 AM