What the deuce? We have a fracking month! Well I was threatening major freakout today but none so far. The day is not over yet and I have my alterations tonight. Perhaps after that.
So what have I been doing? Well, let me show you what's been completed.
First the sign for the card bucket: 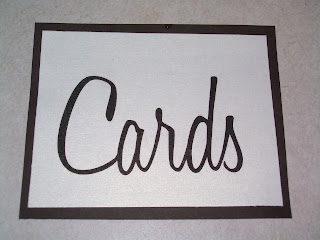 Next the signs for the reserved tables. We decided not to do table assignments but we are reserving a few tables for those A listers (my dad, my aunt, Tai's mom, perhaps Tai's sister). 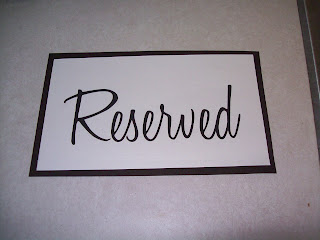 So I decided to do bathroom baskets. No picture of the completed basket but here is the sign. Yes, I ripped off that poem. But at least I didn't use the whole poem. 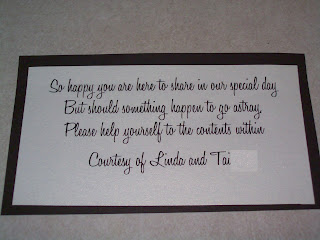 Rehearsal dinner invites. These are ready to go once I get envelopes to mail them. I hope to that before the weekend is over! And here I shameless ripped off the whole poem. I don't care that it's kind of hokey. And I apologize for that mess at the bottom. I don't know what happened! 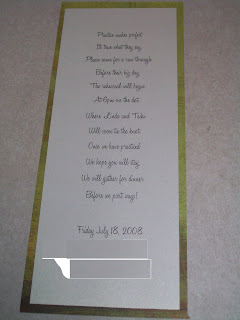 Stuff I don't have pictures of:
The suits are done! Jeff went and bought his and Tai's suit last Saturday. Jeff did a really good job. Funny story though. He insisted on buying Tai a tie. I told him we had ties but he insisted this tie would look really good with the suit. Fine, fine, whatever. We go see the suit and the tie. And yea the tie is really nice. Tai notices the tie came with handchief which he got really excited about. Tai turns to me and says I'm going to look fly with that handchief in my pocket. And I'm like no you aren't. You're wearing a bout not a handchief. It's too much it won't look good. So Jeff says he'll eat Tai's bout so Tai can wear the handchief in his pocket. And I can see him doing it too!
Dad bought his suit Sunday. He also needed to buy shoes. I had no idea that Dad was so picky about shoes. He said he wanted plain black slip on shoes. So I found one pair but it was too plain. Then too shiny, too big, too wide, not wide enough. He tried on every shoe in Sears. Finally he found these:

Not that these are his all time favorite shoe but I felt that he was ok with these.
We bought our rings as well:

Tai's pretty happy with these and I like them. We bought them from Amazon and got them lighting fast.
I also broke down and bought those fans:

I was lucky and won 50 off eBay and found a knottie selling 15 more. I'll just tie ribbons on them and they'll be ready.
We've recieved about 1/2 of our RSVPs so far. Saturday is the deadline so we'll see how many calls we have to make next week.
I'm going to be working on the favor tags on Saturday night. Tai will be at poker so I'm getting together with a friend to watch chick flicks and working on the favor tags. I'll post pictures sometime next week.
I'm more in shock about little time there is til the wedding. I can't believe we'll be getting married next month. I still giggle when someone mentions my future husband. I'm in shock that I'm going to be someone's wife. It's funny that I'm gaining a whole new family too. Well he is too. So strange to think we are almost there!
Posted by Linda at 7:13 AM