Tai still has not decided what he and his groomsmen are going to wear. Originally we thought he would wear dark suits-black or dark grey-but I don't think that will look good with the chocolate brown dresses.

This is a little closer to what I would like our wedding to look like. I left out one of the groomsmen. Oops. I like the lighter brown suits. I think it looks a little better with the chocolate brown dresses. Plus I hope it would be cooler.
I want to go with Tai and look at some suit this month. I'm hoping we can go this weekend. We need to take Dad too. He's going to need to get a suit as well. I figure he'll wear the same color as the rest of the guys. 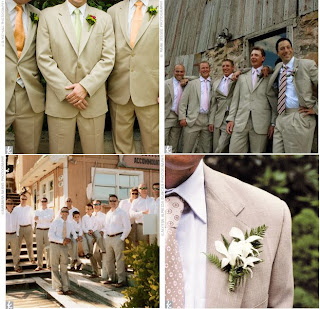 Here's a few more options all stolen from the knot. I like the pastel ties with the suits at the top. The guys on the top right are wearing pink ties. I want Tai to wear a pink tie. I asked him and he didn't really care what color tie he wore. I don't know what color ties the groomsmen or my dad should wear. The guys on the bottom left are super casual. I don't know if we want to go this casual, but I like the picture. Especially to know that later on when the guys are walking around with their suit jackets they'll still look nice. I like the color of the bottom right suit. I like the ivory flower on the lapel. But I don't like the greenery on that one though.
I'll report back with what Tai and I decided on after we go to the store.