Originally I decided that I wasn't going to have seating assignments. I didn't really think it would be necessary. I figured people could decide where they wanted to sit on their own. I would have designated tables for the wedding party and their families, but everyone else would be on their own. Well I'm rethinking that. 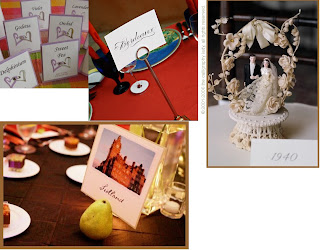 But there are some really cute ideas out there. Above are some I shameless stole. I don't want to assign seats but I thought I would assign tables. It might help, perhaps mix some of the groups up. When we go out we either go out with Tai's friends or with my friends. The two groups rarely meet. I keep trying to mix them but it's hard. Tai's group of friends are pretty tightly knit and not really open. I feel lucky that I'm invited sometimes! And for the most part my friends are pretty much the opposite. I'm kind of nervous that they aren't going to mix at the wedding. It's going to be like an 8th grade dance with the boys on one side and girls on the other.
It's not like I need another DIY project. But I think it would add something to the tables. So I started thinking what I would name those tables in case I decide to do it.
Option one: books. Both Tai and I love to read. I was thinking of using our favorite books. Gone With The Wind, Lord of the Rings, Summer Sisters, and 1984 would be some of our tables. Although I think a small fight would erupt over who would sit at the Lord of the Rings table. I'd have to do the whole trilogy. I could either use the book covers or just type the names.
Option two: streets in Los Angeles. Tai's from LA and I spent a lot of time there as a kid. My folks lived there before they moved to Seattle. We would have Sunset Blvd, Rodeo Drive, Hollywood, Vine, and Melrose.
Option three: movies. Tai and I are movie buffs. Although it would be hard to stick to a theme like romantic movies or action films. We have twenty tables and I don't know if we can only stick to twenty. Some fights might erupt over which 20 movies we choose. I don't know if I want to tackle that one.
I'm leaning towards either the books or the streets in LA. I think either will be ok. But we are not having any camping themed tables. That's not what I want. I can't even think of 20 camping related things. Please don't give me 20. That was not a request :)
Who can tell me what the title refers to?
Posted by Linda at 6:20 PM