I went slightly over budget this week on our groceries. But I have a really good reason. Well two good reasons. First Tai's work hours changed again. It's impossible now for us to have dinner together during the week. By the time he gets home I'm in bed. So I have to make something that he can reheat. That's not traditionally how I cook so I was not prepared. They sprang his hour change on us mid-week.
The second good reason was that in the middle of the week I decided I didn't want meat. Meat became yucky. I have this unexplainable change in taste buds every few months. Meat just doesn't taste good. I had planned on buying tofu when I went to the store on Sunday, but I didn't so I had to go mid week to pick up a few more things. 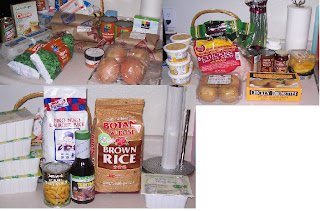 All told I spent about $120 which isn't bad. Sadly though I don't really feel like I cooked anything. At least not much worth showing here.
I did make a fried tofu dish that I'd seen on Good Eats: 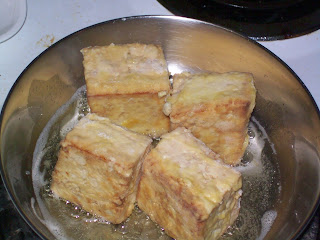 Go here for the recipe. It was pretty easy. I wish I would have let the tofu marinate more. I was pretty hungry and in a hurry so I sped up the process. But the tofu had a nice phyllo kind of shell. I don't know if I would make it again simply because I'm not a fan of frying tofu. Kind of defeats the purpose for me. But the marinade was kind of yummy so I might make that again.
I was hoping to show you the rack of ribs that I made with Tom Douglas's Pork Spice Rub:

But sadly it was eaten before I could take a picture. I guess that means it was yummy. I didn't get to try it since I'd gone out and eaten with my book club.
We're doing ok. Trying to stick to the budget. I think it will be tough for me this week. Tai's hours aren't changing back (that we know of) so I have to think of yummy food that I can cook and he can reheat. I made of a couple of steaks this week. I made that Japanese one pot soup again which he likes. I left the noodles out this time which I think is better. The noddles just seem to suck up all the yummy broth. Plus that does reheat rather well. I would like to learn how to make some other soups. Especially since it's been so cold out.
Posted by Linda at 5:26 PM