I thought I would post about what wedding related items I've bought so far. First here are my lanterns that I bought so far: 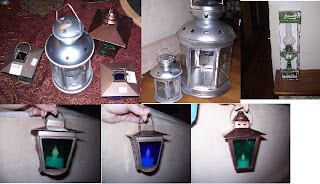 The silver ones are from Ikea. I'm going back this weekend so I'll buy 2 more little ones and one more big one. The copper ones with the colored glass I bought at Liquidation Warehouse. You can see the LED tealights I bought inside. I need more than the 5 I bought, but I wasn't sure if they would work. I'm glad they do. The tall gas lamp (which I think look like a bong) were purchased at Big Lots for $4 each. I bought 2. I wish they would had more. The top left one is kind of what I'm thinkingof doing, but I think I need more than 4 on each table. 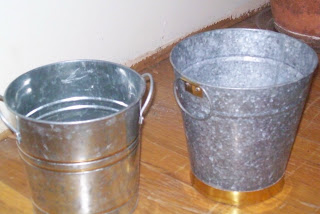 I bought these buckets at the Goodwill. I don't know what I will use them for. I thought I would use them as centerpieces. Put flowers in them. But maybe I'll use them for the ceremony, perhaps to mark the aisle. 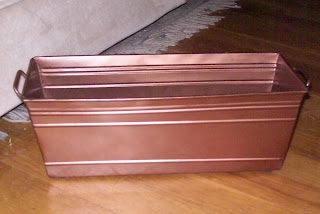 I bought this from another knottie. If I make programs, I'll use this to hold them. If not, I'm not sure what I'll use it for. 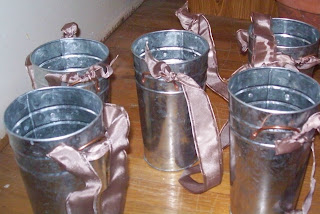 I bought these from another knottie. She used them for pew flowers. She had 5 other buckets but sold them before I got to her. Again, I have no idea what to use these for. 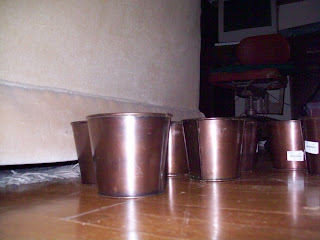 More buckets that I have no idea what to do with. I bought 6. I was thinking of using them for forks, knives, and spoons since we'll be using plastic. I thought that would be cute. But I don't know. 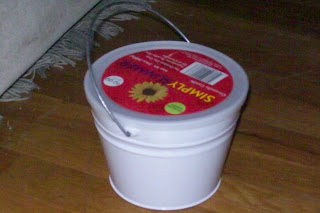 I bought 7 of these citronella candles at Joann's at an end of summer sale. I'm going to tie a brown bow around each one. Tai wanted some of these to keep those mosquitoes at bay.
Hopefully I have some more stuff to show later this month.
Posted by Linda at 10:30 PM